Encouraging people to wander into traffic at will is dangerous.  By now everyone in Chicago has seen at least one “State Law – Stop for Pedestrians within Crosswalk” sign in the middle of the street.  These signs, and the law they represent, don’t do anything but create problems.

The 2010 law says that you have to completely stop, not just yield, for pedestrians in a crosswalk.  It is designed to decrease traffic-related pedestrian deaths.  This is a genuine safety concern.  But passing unrealistic laws is not the way to get a handle on it.  I read an article in the Red Eye that seems to back me up.  It said that pedestrian deaths were up in 2014 compared to 2013.  The signs were installed beginning in 2012.

In some cases drivers can’t see pedestrians.  Once, while the sun was in  my eyes, someone walked in front of my car by one of those signs.  I was lucky to spot her.  On two occasions people in dark clothing have wandered in front of my car at night.  Both were near collisions.  In all of these situations I was not speeding.

Then you have to account for people making mistakes.  You can’t pass a law that says: “people will never mess up from this day forward”.  If a pedestrian wanders into the street at the moment some male driver stares at a girl on the sidewalk, the pedestrian is going to get hit.  Or what if a driver is falling down drunk?  Do you really think he or she will be paying attention to much of anything at all?

I also suspect these signs are damaging automobiles.  A November, 2014 Chicago Tribune story stated seventy-eight percent had been replaced after being run over.  In my experience they sometimes get lost behind the frame of your windshield while turning corners.  They are made of plastic.  But I still think you could break something if you hit one.  If I’m right hundreds of thousands of dollars worth of property damage has likely been done.

Cars are a lot bigger than we are.  The legislators in Springfield can’t change that.  When I was a kid they taught me to look both ways before crossing the street.  It’s a very simple system that has kept me alive and fully mobile for decades. 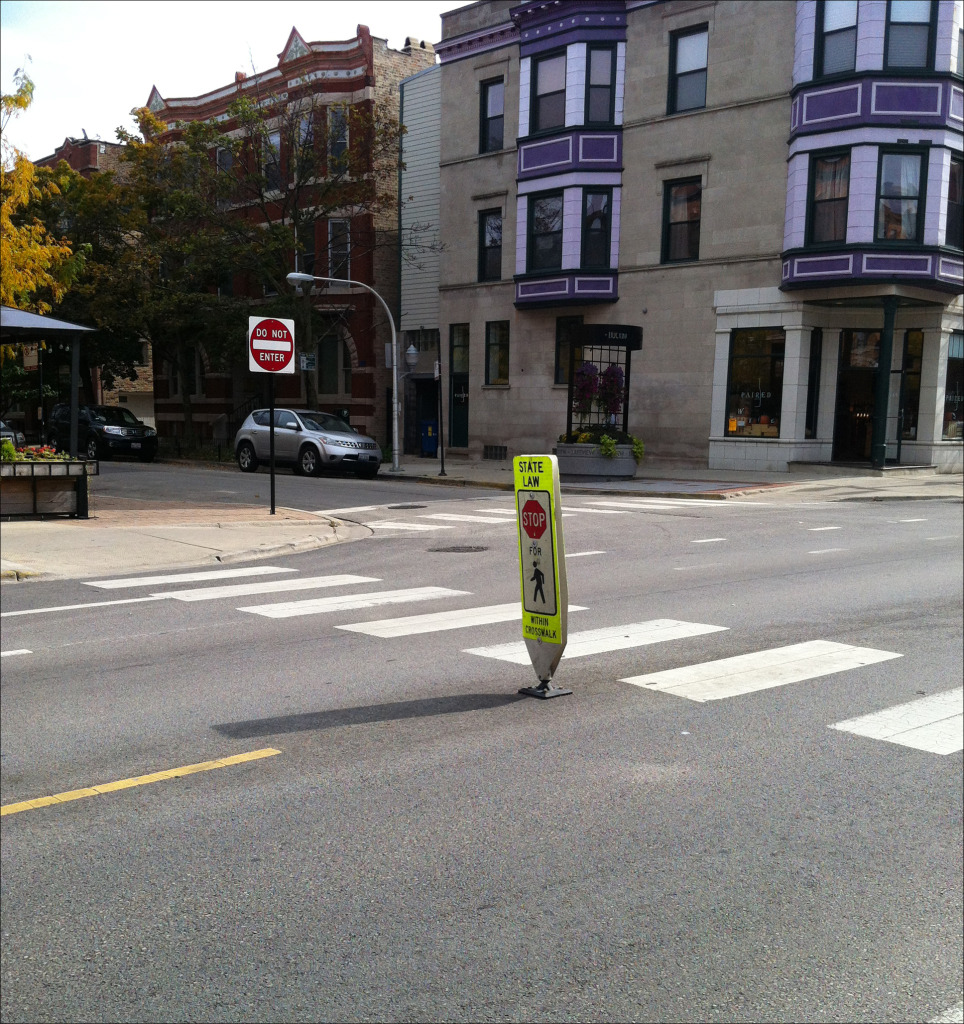