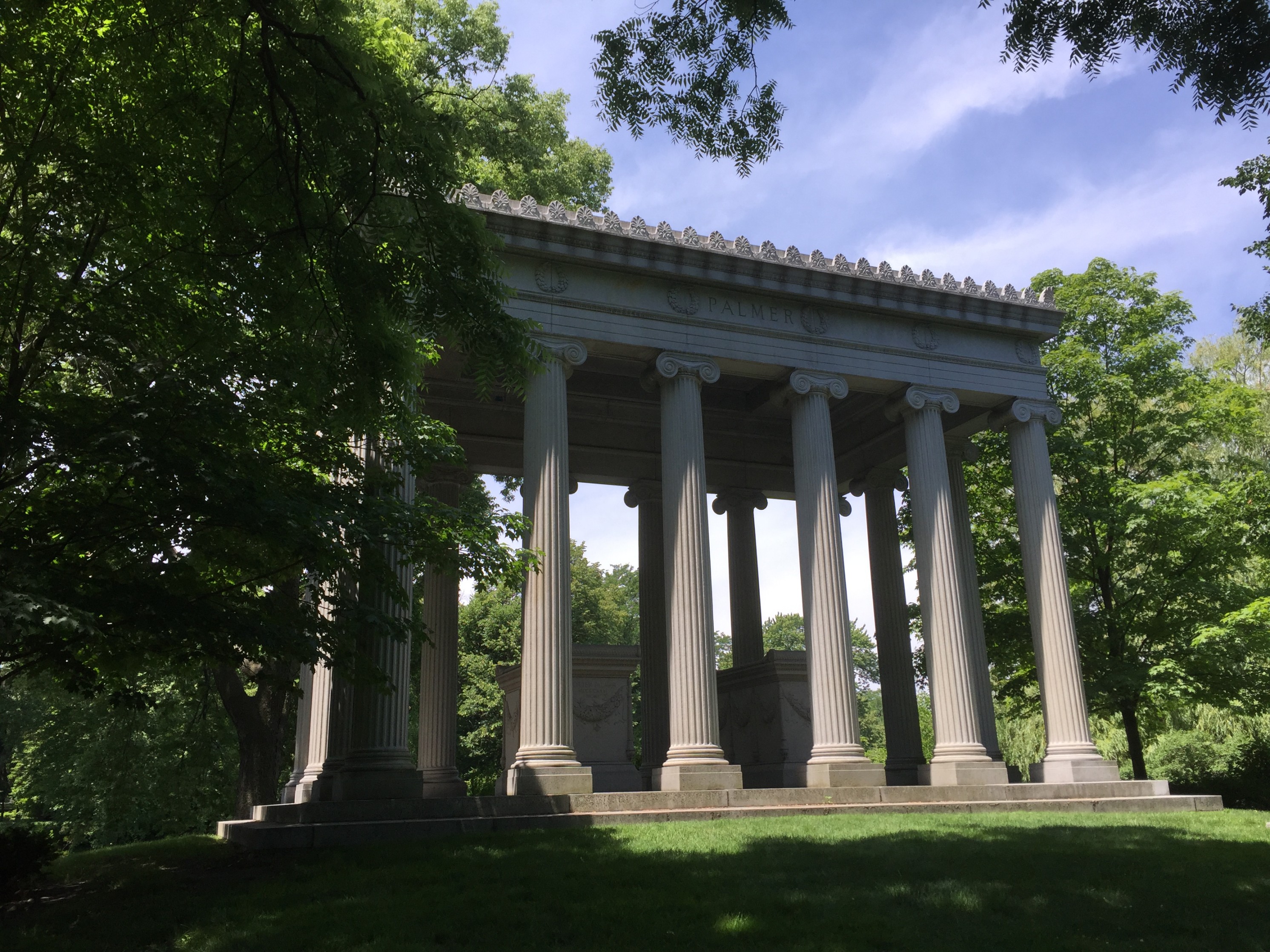 Graceland Cemetery, at Irving Park Road and Clark Street, contains an amazing Chicago history experience.  But you’d never know it from walking by.  The high brick security walls keep you from getting a glimpse of what is inside.  Many of the prominent figures who built this city were laid to rest in Graceland.  Everywhere you look is another family name that now adorns a street sign or public building.  Graceland opened in 1860 and presently encompasses 119 acres.

A few pieces of information will enhance your visit.  Upon arriving it is worth a stop at the visitor’s center.  They will give you an illustrated map with all the major sites listed.  The map also gives you background information on notable people who are there.  You are allowed to drive through Graceland but taking the tour on foot probably allows better absorption of the experience.  The only travel restriction, aside from employee areas, are in place during burial ceremonies.  If one is taking place immediate roadways are off limits.  A sign near the entrance prohibits video photography.  Jogging is also prohibited on the grounds.  Though it is a relaxing environment for a morning run joggers are ejected when discovered by security.

For those with natural interests Graceland also offers a  tree tour.  Ask the visitor’s center for a printed guide if this is of interest.    The property bills itself as the Graceland Cemetery and Arboretum and this is not an exaggeration.  Cemetery Trustees run an improvement fund to manage the over 2,000 trees on the property.  Recent focus has been on adding more color, especially along important corridors.  The tree tour lists fifty different varieties to view.

As you venture onto the grounds sights and sounds of the city fade away.  Street noise is much less prominent.  If there were not a CTA elevated rail line running along the property you might forget Chicago all together. It is quite relaxing, which isn’t necessarily what you would expect from a cemetery visit.

A thorough foot tour requires an hour and a half to two hours.  Even then you might not see everything.  Among the past city leaders to be visited are: architect Ludwig Mies van der Rohe, industrialist Cyrus McCormick, retailer Marshall Field, Cubs owner William Hulbert, real estate investor Walter Newberry, architect and urban planner Daniel Burnham, rail car manufacturer George Pullman, architect Louis Sullivan, meat packing magnate Philip Armour and businessman Charles Wacker.  There are many more.  If you have knowledge of Chicago history being among such luminaries creates a definite electricity.

Recently Cubs great Ernie Banks was interred here.  There seems to have been some controversy inside the family about burial and an effort to keep things quiet.  But news reports confirm the location and his name comes up in a record search on the Graceland web site.  Being that you can hear Wrigley Field crowds cheer from the burial site it is hard to think of a more appropriate arrangement.

The architecture of Graceland is not to be understated.  There is a wide variety of grand statuary, spires and colonnades.  Daniel Burnham has his own wooded island, reached by a bridge.  At least one site, the Getty Tomb, is designated an official city landmark.  Some designs are fairly unorthodox, such as the large pyramid found on the Schoenhofen lot.  William Hulbert’s marker is shaped like a baseball.

Taking some time to read about the lives of those at Graceland will enhance your experience.  These were colorful and successful people who made Chicago what it is today.  George Pullman, for instance, was known for his refusal to negotiate with unions.  His family therefore feared desecration of his grave.  His Graceland tomb was built of steel-reinforced concrete.  The grave was then sodded and fitted with the Corinthian Column and exedra present today.

History enthusiasts, naturalists and casual visitors alike will find Graceland of interest.  It allows one to briefly leave the city for a nature experience while learning about and paying respect to some of the great people who built Chicago.  If you have not visited at least once put it on your list.