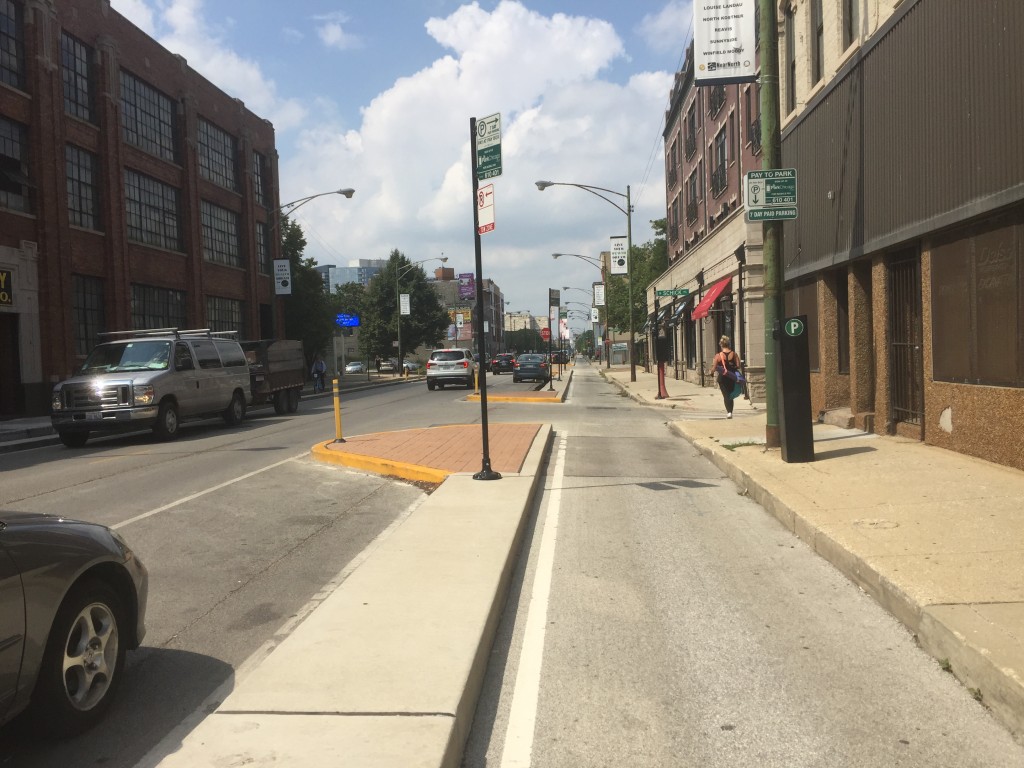 Almost nobody uses bike lanes in Chicago.  Yet the government goes on spending money installing them across the city and suburbs.  Merriam-Webster defines a pipe dream as an illusory or fantastic plan, hope, or story.  Clearly that is what is happening here.

Over the last two years Practical Chicago has taken photos of unused bike lanes at about twenty-five different sites around the metropolitan area.  The result was the same no matter what the season.  It did not matter whether the bike lanes were separated by a concrete barrier or not.  The outcome was similar in different locations.  Empty bike lanes with countless cars driving by them were found in every instance.

It should be noted that these images were taken without planning.  If an empty bike lane was spotted in the course of normal travel it was photographed and filed for this article.

If there was any reality to the idea of mass bike travel in the United States it should not be this easy to take so many barren photographs.  According to a 2015 Chicago Tribune article bike lanes cost between $125,000 and $200,000 per mile to build.  That means that the cost of this pipe dream is quite high.

Conclusions from a 2016 John Locke Foundation article suggest a reason for this planning stance.  They think that government officials in North Carolina are shaping policy to try and change people, rather than policy to serve the demonstrated needs of the population.  In Raleigh, they say, $4.62 million was spent in 2015 constructing on-road bike-ways.  Well below 1% of the population apparently used bicycles to commute according to their report.

The Chicago Tribune seems to suggest the same thing is going on here.  It reports that about 1.7% of Chicagoans, about 21,000 people, bike to work.

Yet the Active Transportation Alliance states that current bike infrastructure efforts “have missed the mark when it comes to spurring new riders” and the Chicago Department of Transportation seems to be backing them up.  Between 2011 and 2015 $12.78 million was spent adding bike lanes.

It is hard to know where the truth lies.  Maybe our officials are trying to change us.  Or maybe it has more to do with catering to voters they feel they need to win: old Baby Boomers who never grew out of their hippie ways and Millenials who haven’t had a chance to grow out of them yet.  It could also have something to do with providing some combination of projects/jobs to city government supporters.

But these projects are funded with a combination of Federal and local money.  Considering both entities have a ton of debt on the books this is probably not the time to be building a lot of things people do not use, especially when at times they make it more difficult to drive.    The money would be better used to fill the many potholes on our streets.