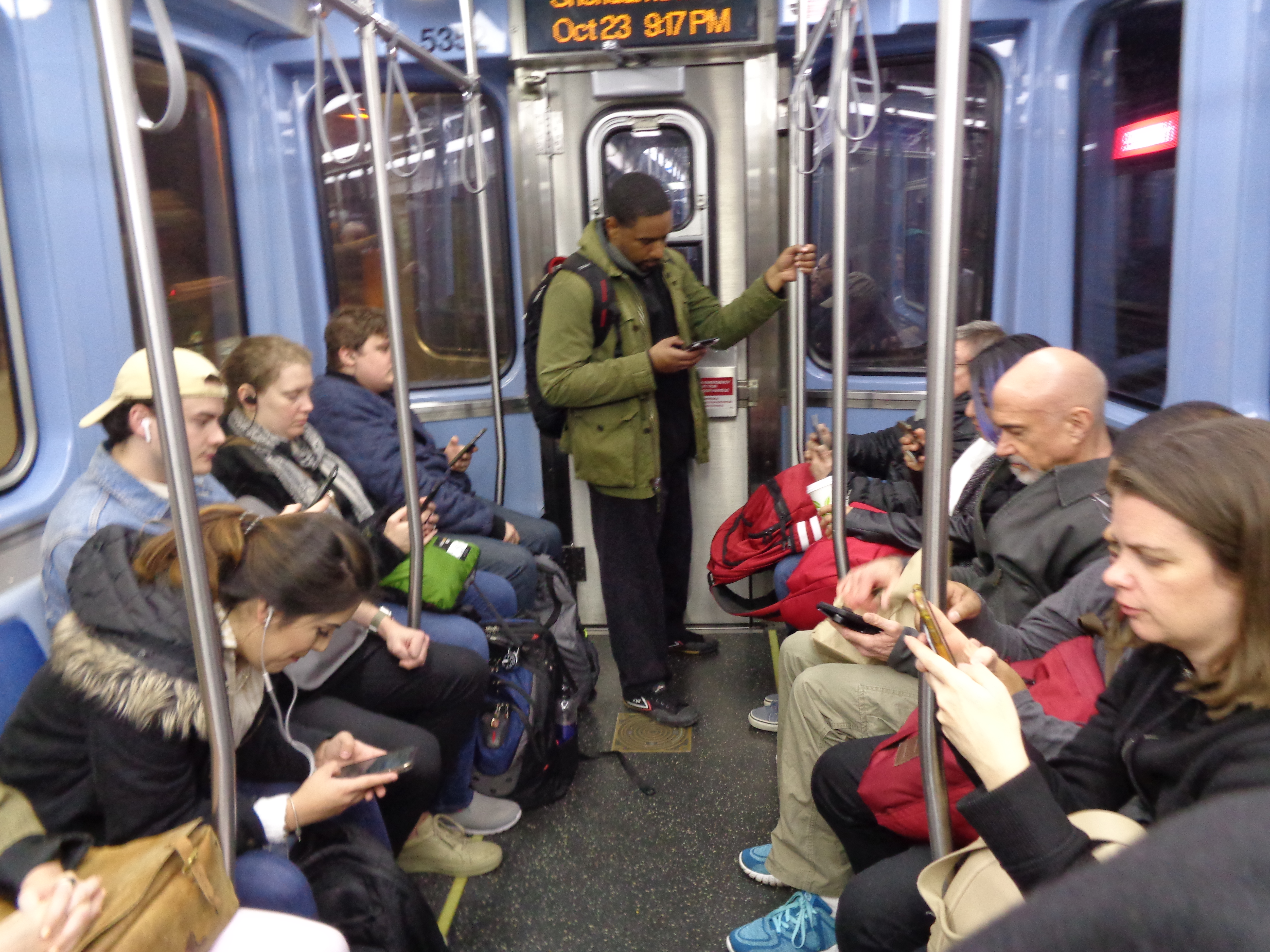 Everyone in the photo above is glued to their phone: people of different genders, races and ages.  They happily browse the web, watch YouTube videos and respond to text messages while riding a northbound train in the State Street Subway.

What they may not realize is that their activities send valuable streams of data back to technology companies.  That data is packaged and used to make money.

It is eerily similar to the role of humanity in “the Matrix” series.  In those movies future post-apocalypse human beings are enslaved in vast fields of life support pods to produce electricity for a race of machines who rule the Earth.  For pacification the minds of those humans are plugged into a software program that makes them think they are living in a 20th century human-ruled world.

What information do technology companies collect?  Google, among other things, stores: a history of every search you have ever made across all your devices, your entire YouTube history, every Gmail message ever sent and Google Drive files.  The Google Drive files saved include ones that have been deleted.

Facebook is just as bad.  They build a detailed profile of your personality based on what you have “liked” and “disliked,” what advertisements you have clicked on, and information you may have provided.  Your birthday and employer are two examples of the later.  Facebook also keeps a history of locations where you have logged on.  The more time you spend online the more detailed all this information becomes.

Connected devices make life better in a lot of ways.  Traveling is easier with a map application.  Text messages, mobile email and cellular phone technology make it easier to get in touch with people.  We can take large numbers of digital photos, whereas in the past we were tied to twenty-four photo film rolls that had to be developed.  Any information we desire is instantly available through search engines.  The CTA train in the photo above is safer because of streaming security cameras in the ceiling.

But the trade-off for those things is that we become automatons.  And bigger concerns beyond simple data privacy are beginning to emerge.

A recent Newsweek article described issues with the Amazon Ring Internet-connected doorbell.  Unbeknownst to customers Amazon made deals with 400 police departments across the country that gave police access to the video feed from those devices.

When you have a camera on the front of a home sending video to the police, who is most likely to appear in the feed? It is the residents who come and go all the time, not some criminal. People who bought Internet-connected doorbells almost certainly did not bargain on giving law enforcement surveillance access.

The Internet has grown steadily since widespread public introduction.  In the 1990’s it was AOL, Netscape and personal home pages.  In the 2000’s it was Internet banking, Yahoo Groups and the beginnings of widespread e-commerce.  Today it involves people looking at their smartphones every few minutes and digital personal assistants in the home.

The current state of privacy was inevitable.  Sooner or later people were going to realize that valuable data could be recorded and monetized via the Internet.

The question is: what happens now?

In Europe sweeping laws have been enacted.  Among other things Europeans have to give explicit permission for their data to be collected.  Companies cannot start without approval.  Europeans also have a right to have their data deleted if they don’t want a company to keep it. Companies have to delete the data without undue delay, or face a penalty.

In the United States there has been a lot of recent discussion in Washington on the issue.  Unusually for these times that discussion has been bipartisan.  Several states are considering or have passed privacy laws.  Mark Zuckerberg testified before Congress last year as the Cambridge Analytica scandal emerged.

But for the moment no concrete Federal Laws have emerged.

We at Practical Chicago believe the free market always wins out.  And that is in evidence here.  So far people have happily traded away their privacy for the use of gadgets.  But the fact that discussion is taking place among law makers shows that may be changing.

Given the huge potential negative implications of this technology some common sense regulation is probably in order.  In a world where we increasingly cannot avoid the Internet people should have some rights as to how their data is collected and monetized.

However that turns out one thing is certain: taking the time to educate yourself on the consequences of using technology is a prudent course of action.  There are repercussions to be being connected to the Internet all the time and people would be wise to think about that.

Google and Facebook both offer the option to download all the information they have on you in an archive file, and that is a good place to start.  From there you can begin to consider if it might be time to limit how invasive technology is in your life.