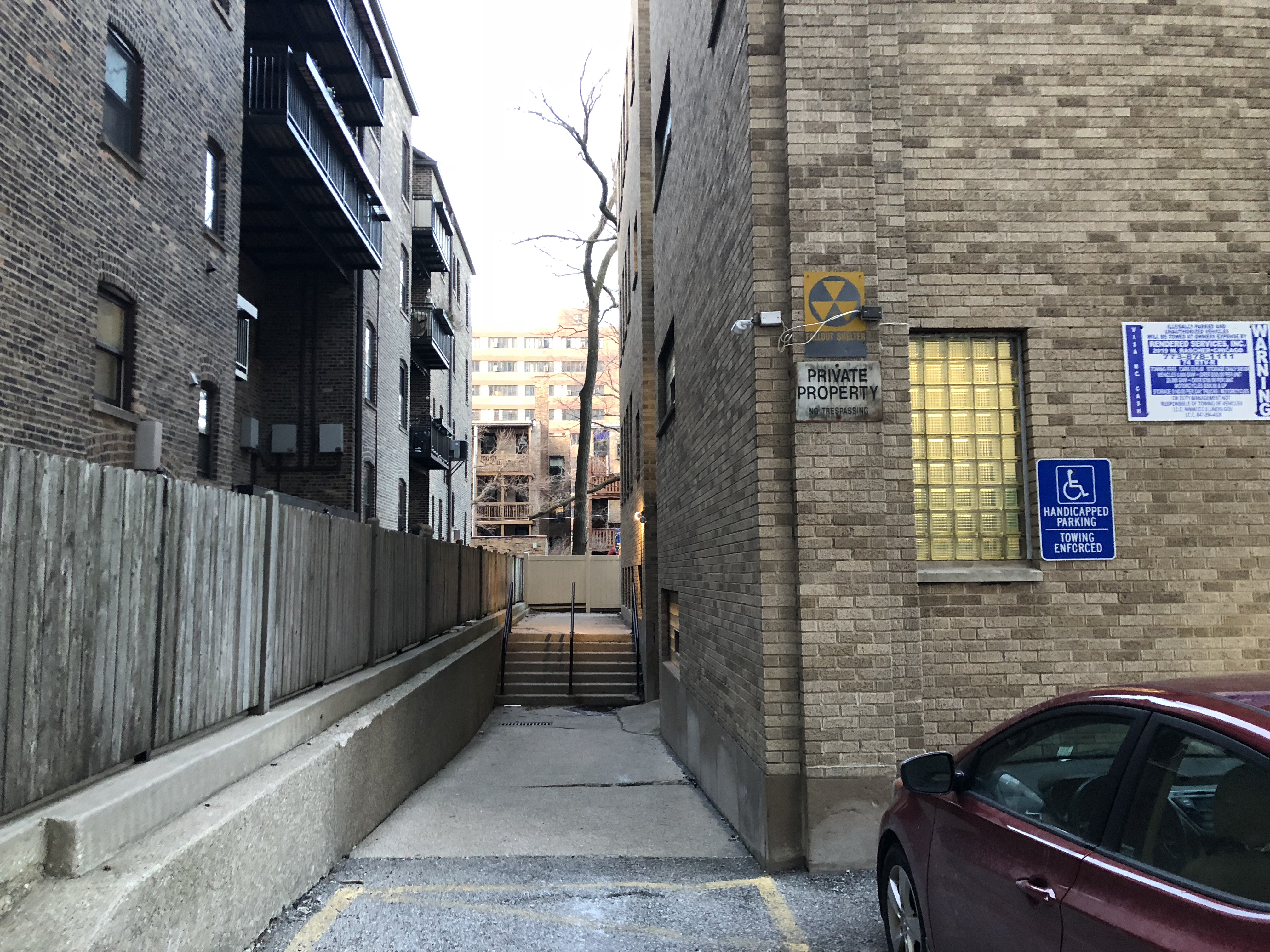 The orange and black “FALLOUT SHELTER” sign, with three triangles inside a circle, in the photo above is a reminder of a frightening time now past.  It is on the southwest corner of the former Immaculata Catholic High School building at Irving Park Road and Lake Shore Drive.

Starting in the years after World War II and lasting until the fall of the Soviet Union in the 1990’s the U.S. and the U.S.S.R. had enough nuclear weapons to destroy modern civilization several times over.  When political tensions were high people wondered if one or the other might get insecure, or get the wrong idea, and start a worldwide cataclysm.

In fact there were several near misses.  In 1979 someone in the North American Aerospace Defense Command inadvertently ran a training simulation program.  Until U.S. officials consulted satellite data it appeared to those in charge that a nuclear attack had been launched.

More computer problems led to a similar close call in 1983.  A new Soviet satellite interpreted the sun reflecting off clouds near Montana as the launch of five nuclear missiles.  The commander in charge knew the satellites were error-prone and reasoned that a nuclear attack from the U.S. would involve hundreds of missiles, not five.  So he called it in as technology error.  Had someone else been in charge worldwide destruction could have been the result.

Nuclear war was a fear that hung over the world’s population every day.  Movies released during the 80’s do a good job of capturing how people felt at the time.  The Day After, Threads, Testament and War Games are all good examples.

People old enough will remember when the City’s air raid sirens were turned on to celebrate the White Sox clinching the 1959 American League Pennant.  Fire Commissioner Robert J. Quinn thought it was a good way to celebrate.  But in reality the City was horrified that weapons of mass destruction were about to strike.  People rushed into the streets, crowded children into basements and said Hail Mary prayers.

And that is where the fallout shelters came in.  Once upon a time buildings all over the City were stocked with large containers full of food and water.  They were designed to sustain survivors in shelters until rescue could be attempted.

Most have likely long since been cleaned out.  But in 2014 rations were removed from the basement of UIC’s Daley Library.  And odds are at least a few containers are still out there in subterranean rooms waiting to be dealt with.

Doubts existed as to how effective these shelters would be in a bona fide nuclear emergency.  But the Federal Government doled out millions to stock them.  Politics being what it is taking action, no matter how unrealistic, was preferable to taking none.

In the face of common sense thinking the naysayers were probably right.  If Chicago alone was the subject of a nuclear attack the shelters might have worked.  Military forces in radiation suits could have come in and evacuated survivors.  But given that the U.S. and U.S.S.R. had enough missiles locked onto to each other to insure widespread destruction it is doubtful the shelters would have done much but prolong the inevitable.  If the entire U.S. was devastated by a nuclear attack where would rescue come from?

While the threat of large scale nuclear annihilation is not a present concern, the so-called “Cold War” should make us think.

Terrorism and international crime are the biggest threats the world currently faces.  President Trump has taken a lot of criticism for his policies tending toward more closed immigration policies.  But should we allow anyone from any violent third-world country into the U.S. without scrutiny?

Absolutely not.  Many Muslims, for instance, disdain anyone who does not support their beliefs.  And they have shown their predilection toward extreme violence against such people on numerous occasions.  The 1972 Munich Massacre and the 2016 Nice Truck Attack are just two examples.  There are numerous others.

Should they be allowed into the U.S. without examination or restriction just to support some fuzzy idea that we are “good people” or “not racist?”

Another question involves those from south of the border.  In 2018 the Crime Prevention Research Center used a set of data from Arizona that detailed criminal convictions and found that illegal immigrants between 15 and 35 are less than 3 percent of the state’s population, but nearly 8 percent of its prison population.

One study is not conclusive.  But it should be enough to make people think.  There are certainly plenty of problems with poverty, corruption, violence and drug trafficking in Central and South America.  We have plenty of our own issues and do not need to import those of other nations.

Even the New York Times, a publication that seems anything but right wing, noted a large crime problem in Mexico.  It said that last year more than 9,000 people were forcibly disappeared. More than 500 field searches across Mexico led to the discovery of 800 clandestine graves and the unearthing of 1,124 bodies.  Mexican officials said most disappearances have taken place in 10 different states in swaths of the country with a heavy presence of drug cartels.

Anyone should be afforded the opportunity to immigrate to the U.S.  But in this day and age of terrorism and international crime we certainly should not have an open door policy.  People who want to come here need to be subjected to a thorough investigation beforehand.

Nor should civic leaders be declaring Chicago a “Sanctuary City” for illegal immigrants.  Democrats like the idea.  But that is because they are hyper-focused on what they perceive to be a voter base, without regard for any real world safety concerns.

All it takes to create catastrophe is a few intelligent, motivated people with evil intentions.

If that seems extreme consider this: It was only a handful of people who caused the extraordinary destruction of 9/11.  We would be foolish to forget that lesson less than twenty years later.

When you see large numbers of unrealistically smug-looking, frumpy, beard-sporting men in their 20’s walking around the city seemingly without a care in the world you get the feeling that we already have.