Owners of older large mall properties in Chicago have a problem on their hands.

Department stores that once loomed large on the retail landscape have gone bankrupt or reduced their location numbers.

That puts these mall owners, who have buildings designed for department store occupancy, in a difficult position.  With tenants disappearing and no rush of similar replacements on the horizon what are they to do?

It may be too early to say how the situation will shape up.  But some early signs of change are intriguing. 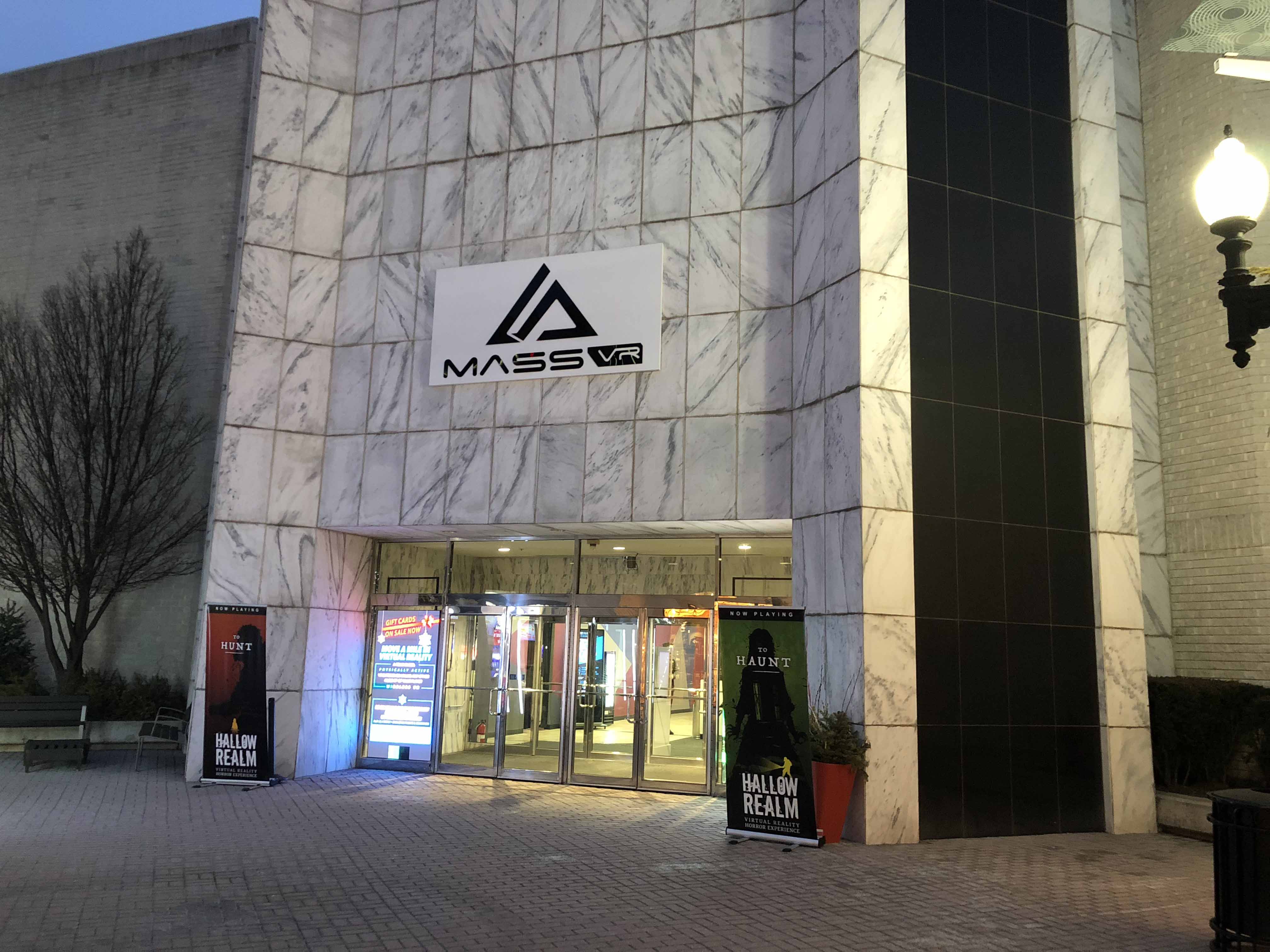 Put on a set of goggles and you are transported into a fully immersive live action video game.  During your game you walk around on multiple levels and interact with other players.

On a Fall, 2019 Friday night visit the schedule was fully booked.  It seemed to be mostly teenagers, although the facility moderator said that people of all ages sign up.

It was originally created as a pop-up experience.  According to ABC 7 this was supposed to close the end of 2019.  The fact that it is still operating as of this writing means the original run must have been successful.

The rest of Old Orchard seems to be doing fine.

There are signs of renovation at Edens Plaza in Wilmette.  The rear entrance of the former Carson’s anchor building has construction warnings posted over a temporary wooden entrance.  A contractor’s trailer sits on the pavement nearby. 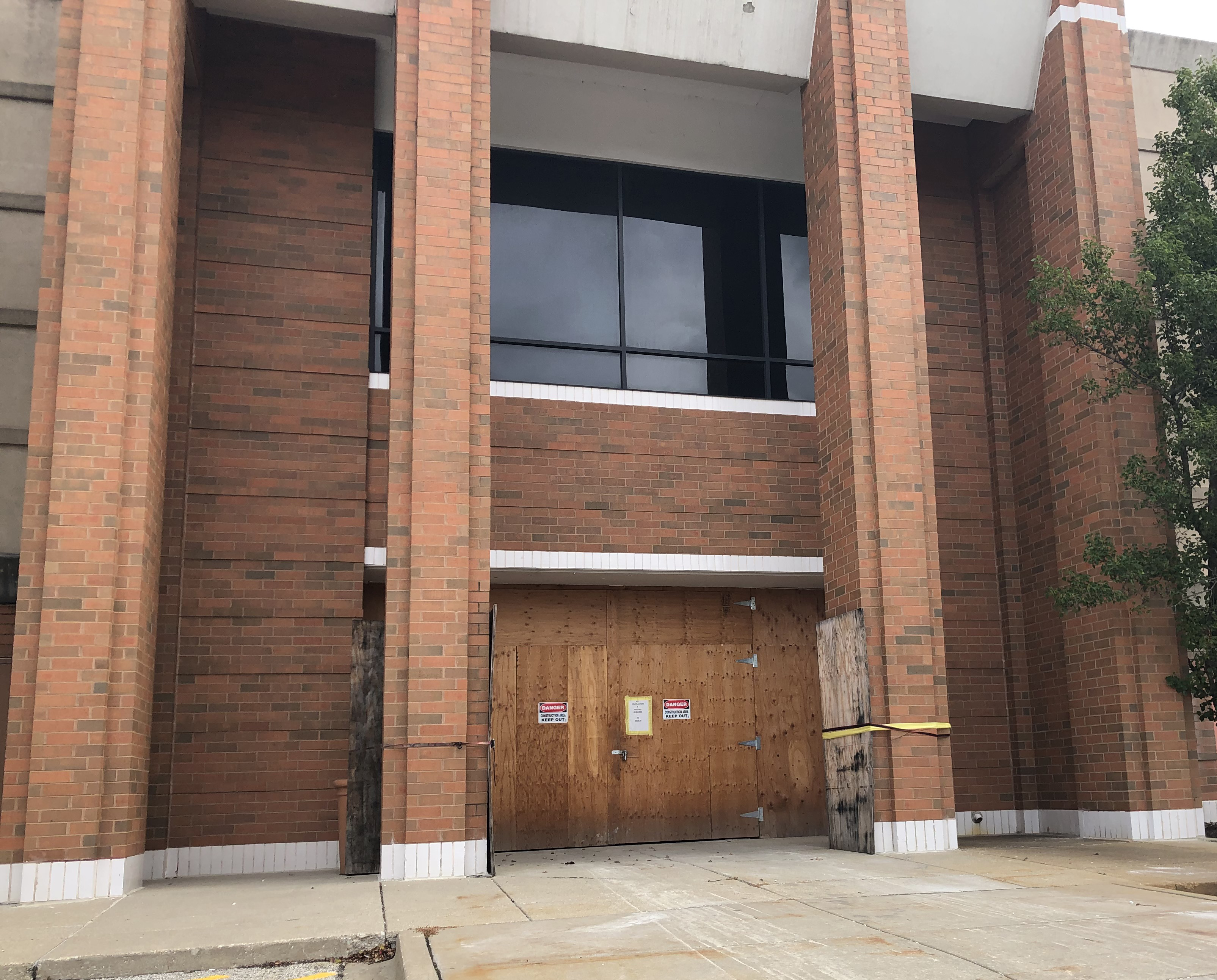 The rest of Eden’s Plaza is well occupied.  This former Carson’s building had been separately owned, and tied up in bankruptcy court.  But new construction seems to signal that things are moving forward.

The surrounding community is very affluent.  And the success of the rest of the plaza says that there is likely a viable use for the building in some form, perhaps through subdivision.

Another mall that lost a Carson’s location, the Lincolnwood Town Center at Touhy and McCormick, managed to find a new anchor to take over.  The Roomplace furniture outlet filled their vacant building. 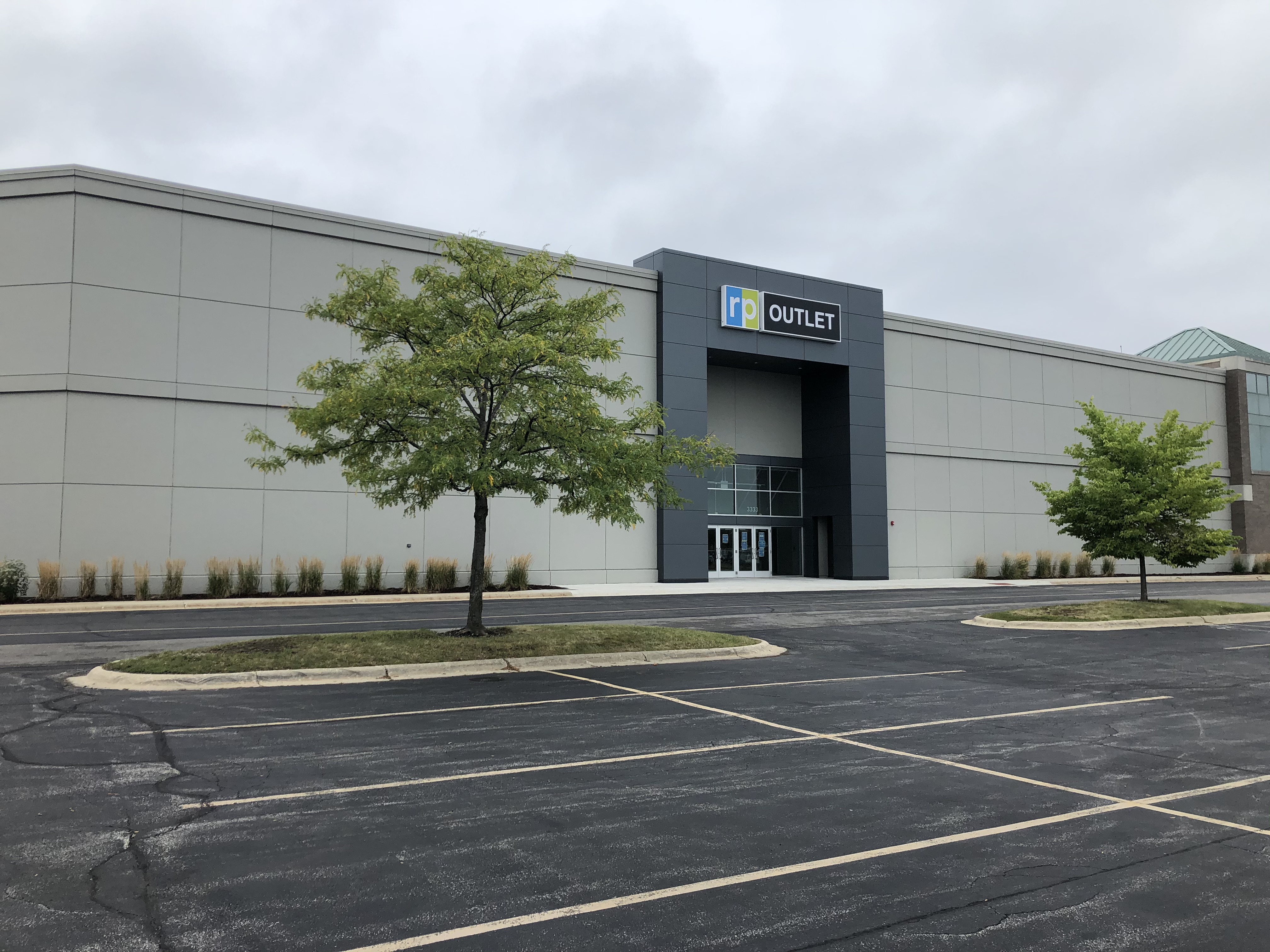 The Town Center looks to be around 85-95% occupied and there were customers around the day Practical Chicago visited.  So things seem to be in reasonable shape.

The Stratford Square Mall in Bloomingdale has demolished a building which formerly housed Macy’s.  A freestanding building to be occupied by Woodman’s grocery store, with no direct mall connection, is being built in its place. 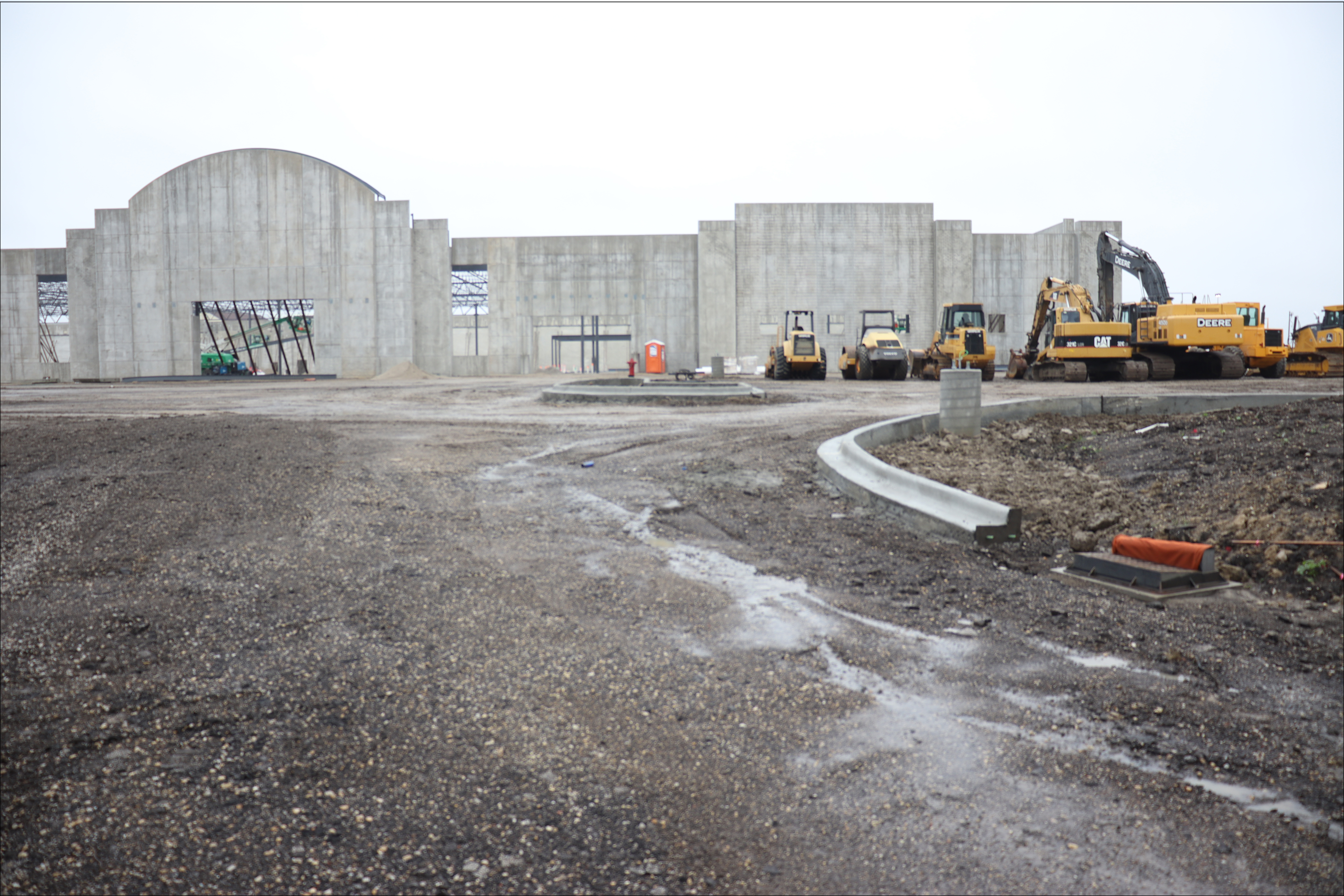 Stratford Square has suffered a severe rut in recent years, even given the current retail climate.  Four anchor stores have been lost since 2014: J.C. Penney, Macy’s, Carson’s and Sears.

A recent weekend visit found two remaining anchors, Kohl’s and Burlington, and a significant collection of smaller tenants, mostly concentrated on the lower level.  The property was not a ghost town.  There were patrons walking around.

But even with that you have to wonder if the rest of the mall might not eventually be demolished.  At casual glance homes in nearby subdivisions seem to be well-occupied.  And nearby retail properties featuring smaller spaces for stores like Marshall’s look to have low vacancy rates.  So, with a glut of vacant square footage and acres of empty parking spaces you have to consider that a residential replacement project could come together.

J.C. Penney, with multiple locations in Chicagoland, was reportedly close to a deal this week to sell itself out of bankruptcy.  The buyers would be its lenders and two of its landlords, Brookfield Property Partners and Simon Property Group.  It is thought the deal will preserve mall occupancy. 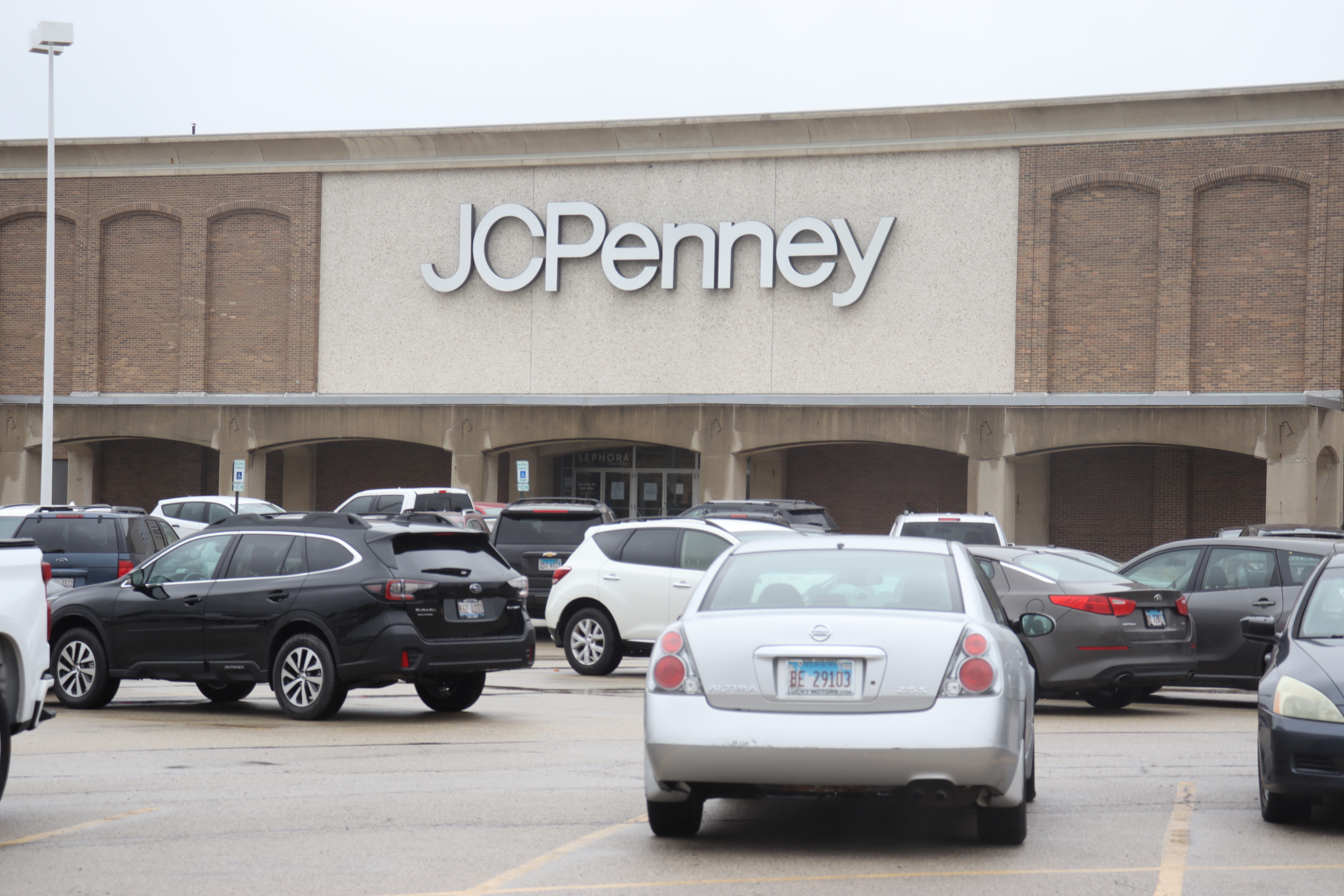 And it is not without promise.  A recent Saturday visit to Lombard’s Yorktown Mall, which includes the J.C. Penney shown above, found decent crowds despite COVID panic and one vacant anchor.

There is convenience in visiting a department store, or the mall in general, when you need multiple items.  Plus returning things is easy: drive back to the store and take care of it.  You do not have to ship an item cross country and wait to see what happens.

Furthermore, despite recent trends, given that people are social animals it is hard to imagine all activities migrating to the Internet.

One thing is certain: mall owners will not idly sit by while the value of their holdings dwindles to nothing.  They will seek out any and all strategies to create value.

Watching the picture take shape will be interesting.