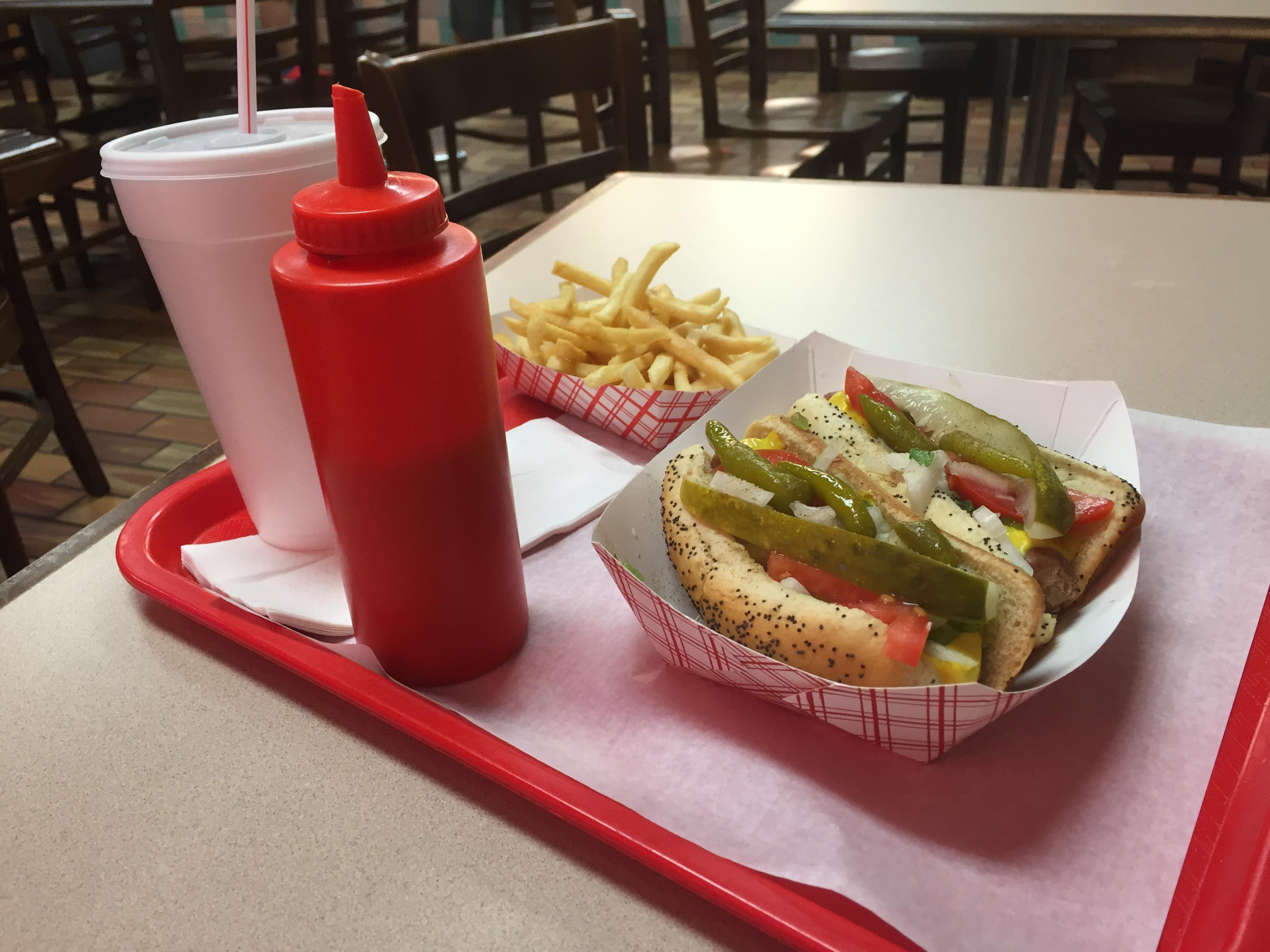 Chicago’s personality is made up of many features.

One of them is our hot dogs.  And unlike many other things, a Chicago-style hot dog is the same on the South Side as it is on the North or the West.  What makes a hot dog Chicago-style?  This is the classic recipe:

For obvious reasons this combination is sometimes referred to as “dragged through the garden.”

Hot dogs were originally brought to America by German immigrants.

The “dragged through the garden” concept began to take shape at the famous Maxwell Street Market during the 1920’s.  A melting pot of immigrants from diverse backgrounds, they experimented with various topping combinations stemming from their roots.  The result was a fast, filling, inexpensive meal that was extremely popular in Maxwell’s fast-paced environment.

The Great Depression which followed solidified the Chicago Style.  After the market crash in 1929 hot dogs went from a favorite cheap-eat to a necessity.

The only problem was that even the lowly hot dog was often too expensive for such lean times. A down-on-his-luck former factory worker would often eat three or four to fill himself up. Things had to be stretched even more to make it both filling and affordable.

Maxwell vendors, being the practical people that they were, started piling dogs high with the vegetables sold all around them to transform a single hot dog into a more filling and nutritious meal.

There were many different variations on “dragged through the garden,” but it became apparent that the sacred combo of short peppers, mustard, pickle, relish, onion, tomato, and celery salt was the best of the bunch. The Chicago dog was born.

Today you will still run across variations on the theme.  Gene & Jude’s in River Grove, for instance, serves their dogs on a plain bun, topped with onions, sport peppers, mustard and relish.  Then they put an order of french fries right on top before wrapping it all up.

The idea of the fries is twofold: keep the hot dog insulated and hot until you open it, plus add crunch and saltiness.

It is an uncommon approach for for sure, but one that has stood the test of time.  Gene & Jude’s has been open since 1946.

The key concept to keep in mind wherever you eat is that Chicago-style hot dogs never come with ketchup.  If you want some be sure to ask for it on the side.

Sometimes even getting it on the side is not possible.  If you want ketchup at Gene & Jude’s you will have to visit the nearby McDonald’s.  They do not keep it in stock.

Where is the best place to sample a Chicago-style hot dog?  Restaurants displaying the Vienna Beef logo are always a good bet.  There are many located throughout the area, and they usually offer a classic look with no pretension.

Here are three examples, all verified for quality by Practical Chicago:

The Vienna Beef Company itself is an area tradition.  Due to the long-time presence of the Union Stock Yards, which operated from 1865 to 1971, Chicago became a leader in the industrialization of food.

Vienna debuted at the Chicago World’s Fair in 1893, attended by over twenty-seven million people.  After the fair founders Emil Reichel and Samuel Ladany, both Hungarian immigrants, opened their first store at 417 S. Halsted.

128 years later they still make hot dogs with the same recipe.  Try one for yourself “dragged through the garden,” and the reason will be obvious.