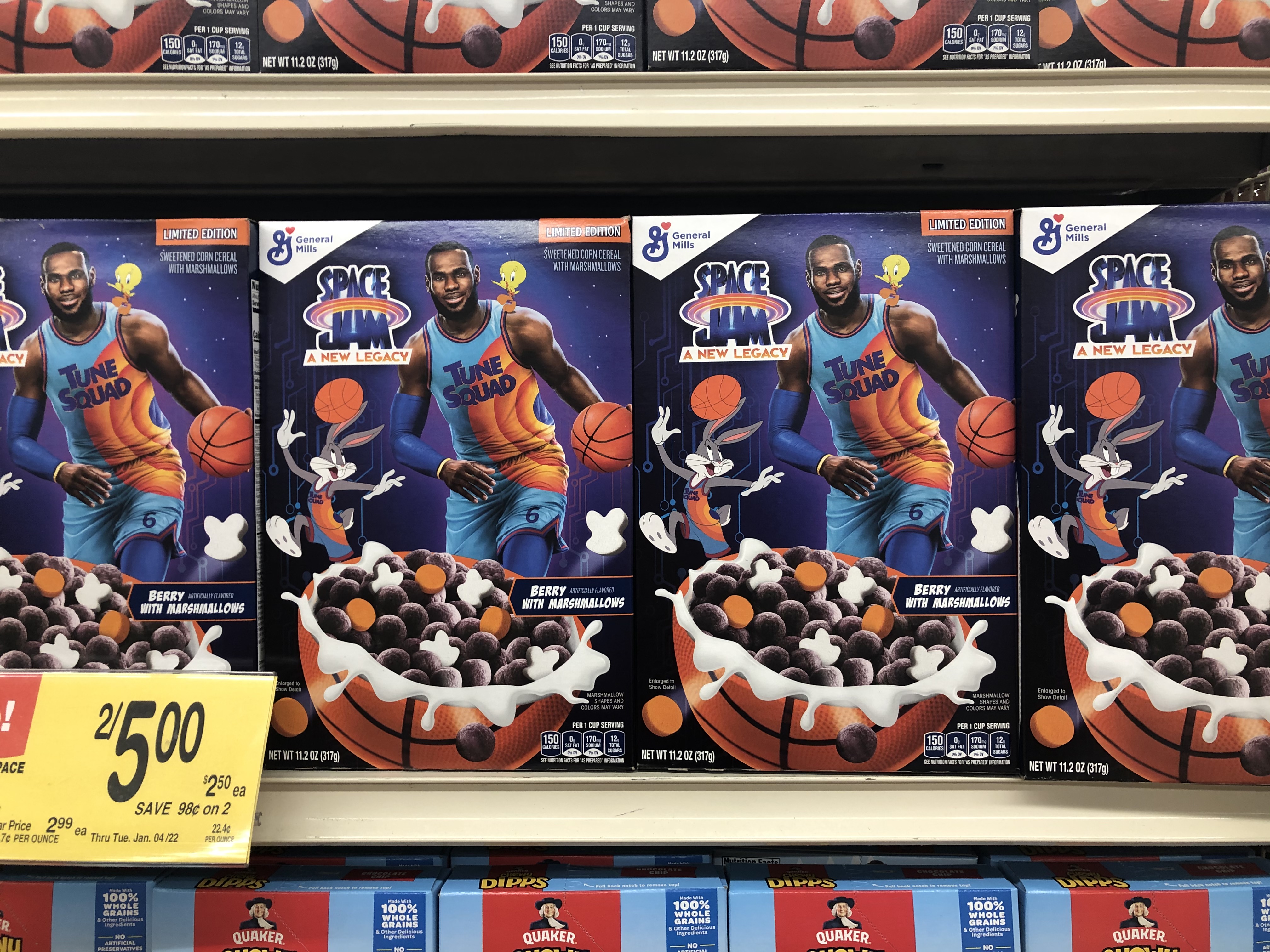 Le Bron James is no role model.  So it is hard to understand why entertainment executives thought it a good idea to give him a Space Jam movie, putting him in the company of Michael Jordan.  It is even more difficult to understand General Mills featuring him on a cereal box.

But if you walk into a Jewel-Osco right now you will see his face staring off the shelves of the cereal aisle.

It is also probably noteworthy that the cereal is brown.  You have to think this is in keeping with some ridiculous “social justice” messaging.

During a June 1st blowout playoff loss to the Phoenix Suns James left the Lakers bench with more than five minutes remaining in the game.  He was taken out as the Suns were leading 105-73.  Phoenix would go on to win 115-85 and go up 3-2 on the defending NBA champions.

Nobody questions Mr. James’ athletic ability.  But this was not the act of a true competitor, teammate or sportsman.

There were a lot of things that set Michael Jordan above the rest.  The biggest factor?  He always believed and never quit.  The second biggest?  He was a team player who worked hard to make his teammates better.

And Jordan was gravely offended when the Detroit Pistons walked off the court without shaking hands after losing Game 4 of the 1991 Eastern Conference Finals.

Anyone who watched the rise of the Bulls dynasty in the 1990’s will probably agree with all of that.  Anyone who did not can watch the excellent Netflix documentary “The Last Dance” and decide for themselves.

This is not the first time Le Bron has shown his true character.  In 2019 he faced backlash after chastising a Houston Rockets executive who expressed support for Hong Kong anti-government protests.  One Republican senator accused the Los Angeles Lakers superstar of “parroting communist propaganda.”

The NBA makes billions in China, and China cut some ties after the statement  was made.  So James, as well as the NBA Commissioner, took China’s side.

But this is the pinnacle of hypocrisy.  The NBA has spent a lot of time painting itself as a bastion of free speech and social justice.  After Jacob Blake was shot in Kenosha James said every black American is “terrified” of being fired upon by the police.

This was despite the fact that Blake, a longtime criminal with a history of domestic violence and sexual assault, was shot after tussling with the police, resisting arrest and then reaching for something in his car.

The Milwaukee Bucks’ decided to boycott a first-round playoff game with the Orlando Magic last Aug. 26 after Kenosha County District Attorney Michael Graveley announced Tuesday he would not bring charges against the police officer who shot Blake.

China’s humanitarian record, meanwhile, is terrible.  Among other things, they are currently committing human rights abuses against the Uyghur people.  The Chinese Communist Party, during the administration of General Secretary Xi Jinping, has pursued policies leading to more than one million Muslims (the majority of them Uyghurs) being held in secretive internment camps without any legal process.  It has been called the largest-scale and most systematic detention of ethnic and religious minorities since World War II.

Le Bron James and the NBA say nothing about that.  They are willing to defend one man who basically left the police no choice but to shoot him.  But they will not speak out against the oppression of millions.

Larry Elder, a black conservative, attorney and the documentarian behind the 2020 film, “Uncle Tom” called James out.  Taking to Twitter he said, “Cops kill 2x as many whites as blacks. Cops kill at least many unarmed whites as unarmed blacks.  In USA, 1/2 of homicide victims are black, almost all killed by blacks. #1 cause of preventable death for white males: accidents. #1 cause of death for black males: homicide by blacks.”

Le Bron James should not be carrying on any legacy of Michael Jordan and he does not belong on a cereal box.  Nobody should encourage their children to idolize a man with such terrible character.