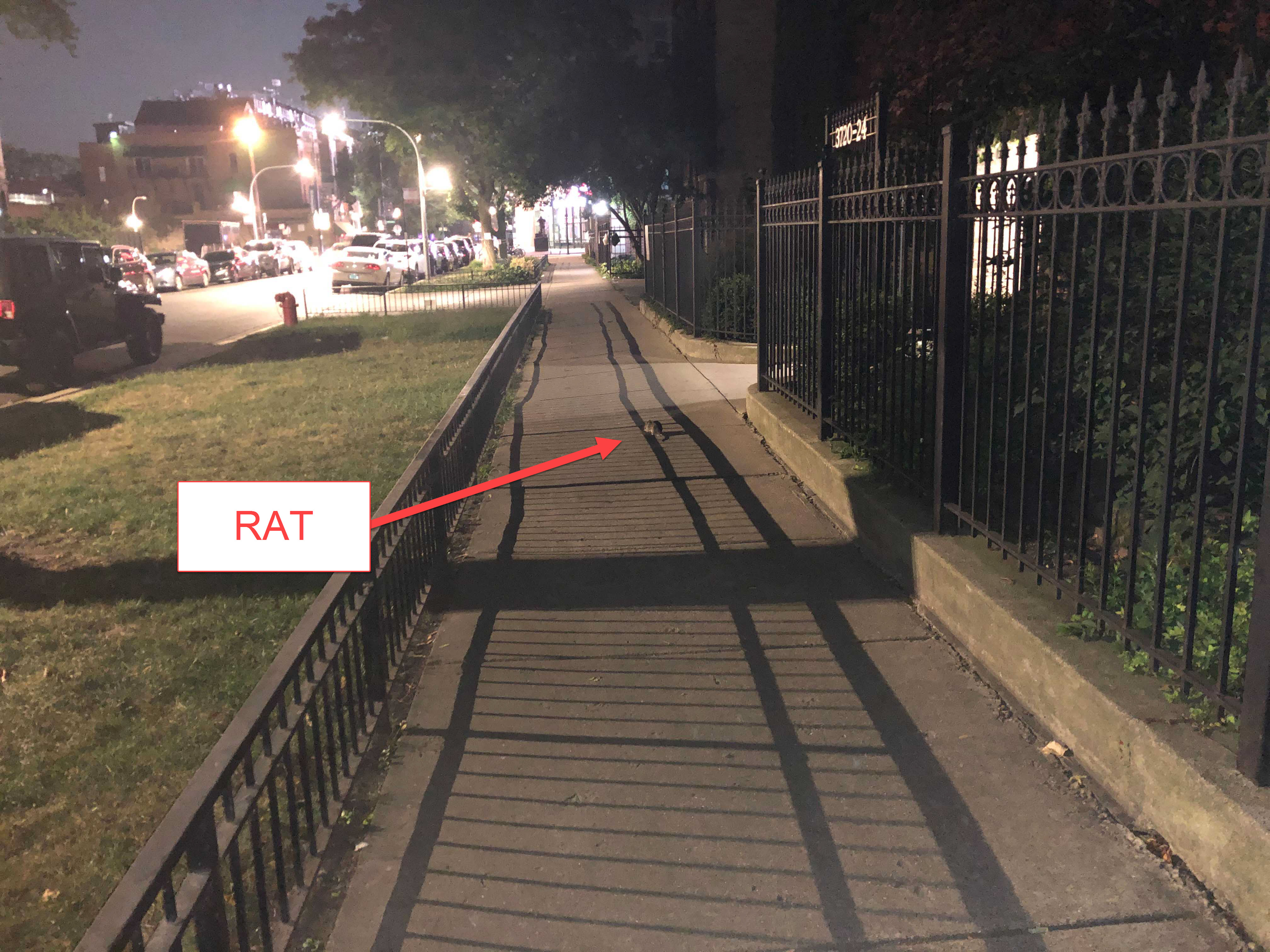 Rats are not difficult to find on Chicago streets after dark on a summer night.

According to our first hand experience at Practical Chicago the problem has been allowed to fester since Lori Lightfoot took office.  And that figures.  She has shown a preference for ignoring serious problems to focus on things like removing statues.

But apparently it goes back farther.  This year Orkin named Chicago “America’s Rattiest City” for a sixth straight year.

What is being done to stem the tide?  The City still sets out poison.  Additionally, since 2012 the Tree House Humane Society has released over 1,000 feral cats onto the streets.  This is billed as a more environmentally friendly alternative  that saves cats from euthanasia.  But the problem is it does not look like it is working.

Back in the 2000’s, when it seemed poison signs could be frequently spotted in alleyways,  a rat openly trotting up the sidewalk at night was rare.  Now it is a common occurrence in Lakeview, for example.  Practical Chicago is based in Lakeview.  So we can speak to that personally.

A June, 2021 CBS 2 article says other neighborhoods have problems.  West Town was first in rat complaints year to date, followed closely by Portage Park, Logan Square, and Lakeview.  If rats can be seen routinely on the sidewalk in fourth place Lakeview, those other areas must be positively crawling.

The feral cat program started in 2012.  It is privately funded, and participants pay about $50 to join.  Then a minimum of two animals are placed on your property.  You have to care for them: set out food, provide shelter and attend to their medical needs.  In addition to being eco-friendly this scenario is supposed to save the City money.

So let’s do the math: In the 2000’s we never saw rats scooting up the sidewalk at night but saw plenty of poison signs.  The feral cat program started in 2012 to be better for the environment and save the City money.  Three years after that we got our first “America’s Rattiest City” crown from Orkin.  Now it seems harder to spot rat poison signs in alleys, the feral cat program continues and rats scurry boldly, like pedestrians, on the sidewalk at night.

We pay a large amount of taxes here.  Why should people take in and feed outdoor cats to fight a problem the City should be taking care of?

And for all the warm fuzzies one might get from helping cats avoid euthanasia, Tree House does not seem inclined to discuss success statistics.  CBS 2, in the article mentioned above, asked them how many cats have been placed in West Town.  They responded that information was not readily available.

In all fairness Chicago residents play a part in this problem.  The Department of Streets and Sanitation asks residents to clean up after their dogs, maintain gardens and birdfeeders, and contain garbage to help support their efforts.  And sure as the sun rises in the east, there are plenty of idiots who do not pay that common sense request any mind.

But that is part of what we pay the City for.  The police department exists because people cannot behave properly.  This is the same thing, just with a different frame of reference.  So if they are using Tree House to divert funding to other priorities it should be stopped.

It sounds an awful lot like mindless hipster doctrine is being imposed here.  And the Mayor’s priorities probably do not help either.  Keeping the rat population at bay is a basic matter of public health.  Our civic leaders need to do a better job.