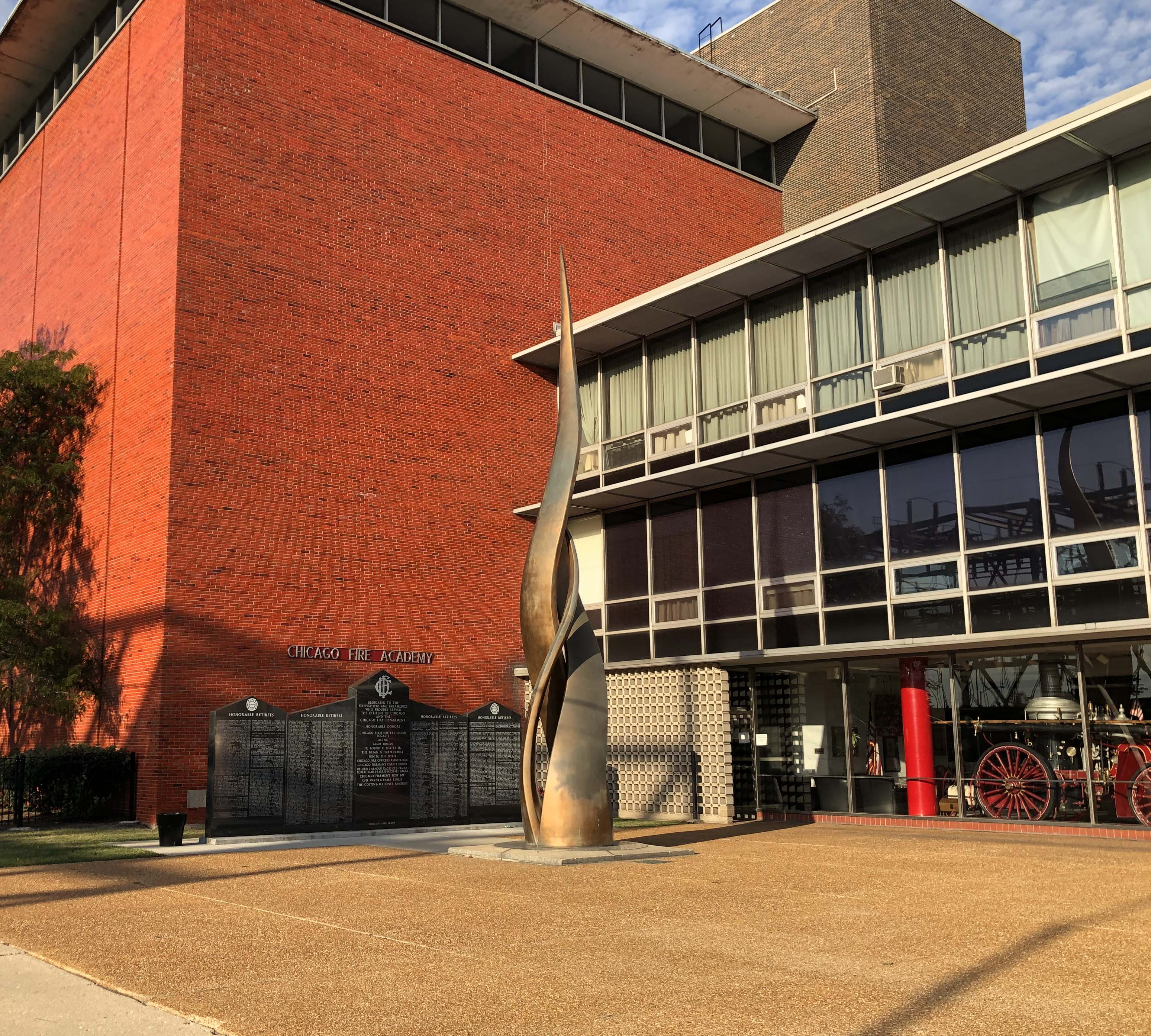 The property where the Great Chicago Fire started is today a largely unremarkable place.  Casual glance reveals little clue to the terrible chaos sparked there a century and a half ago.

The Chicago Fire is one of the most iconic chapters in the City’s history.  It took place October 8 – October 10, 1871.

The fire killed about 300 people, destroyed approximately 3.3 square miles of the city including over 17,000 structures, and left 100,000 or more residents homeless.  Property losses have been pegged at $222 million, about one-third of the City’s total valuation at the time.  It began in a neighborhood southwest of the Loop business district.  A long period of hot, dry, windy conditions, and the wooden construction prevalent in the city, created the blaze.  The fire leapt the South Branch of the Chicago River and destroyed much of the Central business district.  Then it managed to cross the Main Branch of the River, consuming much of the North Side up to Fullerton Avenue.  It passed a little further into Lakeview, at the time a township independent of Chicago, before burning out.  Rain falling throughout the area aided in curtailing the crisis.

The Fire started near the corner of West DeKoven and South Jefferson Streets.  The barn of Irish immigrants named O’Leary was the flash point.  A story has long existed that Mrs. O’Leary’s cow kicked over a lamp inside a barn while being milked to start the fire.  But the truth of the matter is much more complicated.

On October 8, 1871, Mrs. Catherine O’Leary went to bed around 8 p.m.  The O’Learys’ tenants, the McLaughlins, were having a party to celebrate a relative’s visit from Ireland.  Not long after she drifted off to sleep her husband woke her due to the beginnings of the blaze.

Following the fire, Mrs. O’Leary was one of many people questioned in the investigation by the Board of Police and Fire Commissioners. According to O’Leary’s testimony she was asked if she knew anything about the cause of the fire. She said:

“I could not tell anything of the fire, only that two men came by the door.  I guess it was my husband got outside the door and he ran back to the bedroom and said, ‘Kate, the barn is fire!’  I ran out, and the whole barn was on fire.  Well, I went out to the barn, and upon my word I could not tell any more about the fire.”

The October 9th edition of the Chicago Evening Journal reported that “the ﬁre broke out on the corner of DeKoven and Twelfth streets, at about 9 o’clock on Sunday evening, being caused by a cow kicking over a lamp in a stable in which a woman was milking.”

Even though the investigation would clear Mrs. O’Leary of any wrongdoing and could not pinpoint a cause, the press was relentless.  At the time some reporters made up details and stories, even fabricating quotes from Mrs. O’Leary herself – something they’d admit to long after the damage was done.  During the investigation, reporters wrote tales of a haggard old woman in her 70s, when in reality, Mrs. O’Leary was between 35 and 45.  Some falsely wrote that she confessed to starting the fire.

“The press was invoking all sorts of stereotypes about Irish women, about Irish Catholics.  And this becomes part of the historical record,” according to Chicago historian Ellen Skerrett.  And that record became the myth of Mrs. O’Leary and her cow.

Anti-Irish sentiments were widespread enough to routinely make it into the newspaper.  Joseph Medill, co-owner of the Chicago Tribune with William Bross, often put his disdain in print for Chicagoans to encounter on a daily basis.

“The Irish [were] considered shiftless. They were uncouth. They had slovenly women,” continued Skerrett.  While conducting research, she was struck by how contemporary the anti-immigrant language printed in newspapers at the time sounded.

“You see, ‘These are aliens.  They’re suspect.  Can they be real Americans?’  All that kind of stuff was in the mix at the time of Mrs. O’Leary.  It waxes and wanes with different groups coming into the city.”

The prejudice against the Irish went hand-in-hand with anti-Catholic views.  Many American Protestants saw immigrant Irish Catholics as loyal to Rome and the Pope and therefore incapable of being loyal Americans.

“Mrs. O’Leary didn’t profit from any of this,” said Skerrett. “She shied away from the press.  She would pretty much go into hiding.  You could bet that when October 8th and 9th rolled around every year, there would be reporters on her doorstep trying to interview her.”

A few years after the Fire the O’Leary family left their house on DeKoven Street, which had survived the catastrophe though their barn did not.  They moved further away from the City’s center to Halsted Street and  Mrs. O’Leary apparently became a recluse.  She reportedly left her home only for errands and to attend mass.

Mrs. O’Leary’s  husband died in 1894.  She followed in 1895, passing away from pneumonia.  Her son, “Big Jim” O’Leary, would become one of the most famous gamblers in the city and would use the money he won to build a large mansion on Garfield Boulevard.

Today the O’Leary home is long since demolished.  Since 1961 it has been the site of the Chicago Fire Academy.  It is the only address in the City on De Koven, at 558 West (Google Maps: 558 W De Koven St, Chicago, IL 60607).  There is a large, modern, flame-shaped  monument in the building’s central plaza to commemorate the Great Chicago Fire’s ignition point.

The Great Chicago Fire Monument should be a stop on every visitor’s tour.  Spending time on this site to ponder the horror of the Great Fire, while viewing firsthand the fantastic expansion Chicago experienced afterwards, is a momentous experience.